You are here: Home / Book Clubs / THE FLYING CIRCUS 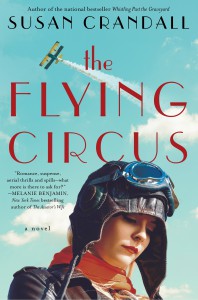 From the Desk of the Author

I knew a man much like young Henry, a man in love with the sky and machines. My father was a private pilot and spent hours and hours in our garage building and restoring aircraft which he then flew over our town. Much as the barnstormers in this book he operated on a shoestring budget and loved the feel of wind in his hair. Many a calm evening in my childhood were spent flying alongside him, usually in a Piper J-3 Cub with the door open (which was possible because it was a tandem two-seater with a door split horizontally. One half would swing up and latch onto the wing and the other swung down against the fuselage. Our  airport was a grass landing strip with a single corrugated-metal building that housed two planes (and sometimes bales of hay). The other three or so planes were tied down outdoors. Gasoline had to be hauled to the planes in 5 gallon cans or purchased at a larger airport ten miles away. We took off over a large cow pasture. (Unfortunately for Dad, he once had a crash right there among the cows, no injuries but to his pride. There was water in the gas…every pilots worry.) I didn’t inherit his love of being in the air, but my experiences with him and his airplane buddies gave me a glimpse into the passion that fuels fliers. Dad was a rebel,

loved to fly too low for regulations.

He built and restored many of his flying machines in our horse-and-buggy era garage.

I’m pretty sure if he’d lived in the 1920s, he would have been a barnstormer.

Mercury’s Daredevils is a group of high-flying stunt pilots—known as barnstormers—traveling across the American Midwest in the 1920s. The group comprises Henry “Schuler” Jefferson, the newly orphaned son of German immigrants; Cora Rose Haviland, a bold young woman from a once-prestigious family; Charles “Gil” Gilchrist, a troubled WWI veteran pilot; and Mercury himself, a scrappy mutt who enjoys riding in motorcycles almost as much as he relishes stealing food.

Circumstances bring Henry, Cora, and Gil together, and shared ambitions help to solidify their bond. They form a makeshift family as they crisscross America’s heartland, drawing increasingly larger crowds with their death-defying airborne acrobatics. But each of them hides a complicated past that could jeopardize their relationship, as time goes on they realize that telling the truth may pose the most dangerous risk of all.

Topics and Questions for Discussion

What was your inspiration for writing The Flying Circus?

The first thing I was seeking when developing this story was a time in history when our country was in the throes of change, much as in the 1963 setting for Whistling Past the Graveyard.  After much research I found my way to the 1920’s.  So many things were in transition: the emergence of the middle class, women’s rights, the fallout from the Great War, Hollywood movies, mass media and its influence on the development of our first youth culture. We had ceased to be isolationists in both our private and national lives. And, of course, there was the fascination with aviation.

My dad was a flier (private pilot and active member in Experimental Aircraft Association, built airplanes in our little garage and actually flew them). So I had some experience flying—and living with a man who loved machines and the sky. The passion I witnessed fueled the beginnings of Henry Schuler.

What sort of research did you do to write the novel?

With this story, I didn’t have the benefit of my own childhood memories of the time period, so the research was much more extensive than for any book I’ve undertaken. Of course I relied upon books and old periodicals and research on the war, Hollywood, social issues, news headlines, aviation, attitudes, fashion, daily life and all.  I probed my mother for stories that her parents and aunts and uncles had shared of that time period. I reached out to the pilots I know (unfortunately my father passed in 1989, if only I’d had him as a resource!) to help fill in my aviation knowledge gaps. And the crown jewel of my research was the discovery of a man who’d actually restored a Curtiss JN-4, “Jenny.” He was instrumental in helping me understand the machine, as well as fill in the small details of the craft that fleshed out the flying experience.

Barnstormers and flying circuses both brought excitement to small towns and cities all across this country.  It was a brief and colorful moment in history, lasting barely 10 years before regulations changed the aviation landscape.

The fun factor is always high with canine characters, so Mercury was a joy—even with his non-existent dialog.  I loved writing Cora from Henry’s point of view, how he saw her in the context of what he knew about the “fairer sex” and the lessons he learned about life from her very different socio-economic background.

Gil was the most difficult character for me to write, not in terms of the actual writing, but in crawling inside his tortured soul.  People who carry the kinds of emotional burdens Gil does always make for a heartbreaking journey as a writer.

The novel’s epilogue is set decades after the final chapter. How do you envision Henry and Cora’s life unfolding in the intervening years?

Oh I think Henry and Cora experienced extraordinary lives, even for the changing times in which they lived.  I doubt that all days were sailed on calm (or even calm-ish) seas, but neither of them would be happy and fulfilled in calm, ordinary lives.  Adventure brought them together and adventure would see them through their days.

Like The Flying Circus, your previous novel, Whistling Past the Graveyard, depicts characters who are on the run, so to speak (in that case, two unlikely friends on a road trip through the 1960s South). What attracts you to characters who have left their daily lives behind?

More seriously, I love writing about people who are searching for their place in the world, and knocking them out of familiar surroundings is a great way to kick start change. I think once you’re out of your “natural habitat” you’re forced to look at yourself (and the world around you) in a much different context.

As a historical fiction writer, you have inhabited many different time periods in your novels. If you could live in any time period, which would you choose?

I think I’d like to live in a time when there were frontiers to be conquered, and they could still be conquered by ordinary people whose most valuable asset was their own resourcefulness.  To forge into new arenas of knowledge and untouched land would be incredible.

Luckily, as a writer, I get the opportunity to “live” in many different time periods.

Who are your biggest literary influences? What inspires you to write?

I’m a very eclectic reader.  I love character-driven narratives.  Of course Jane Austin comes to mind for her clear insight into people’s hearts.  I adored Larry McMurtry’s, Lonesome Dove and Stephen King’s, The Stand, as well as his short story, The Body (which was turned into the movie, Stand By Me). Recently I’ve been quite enamored by the quirky and interesting characters of Matthew Quick (Silver Linings Playbook and The Good Luck of Right Now).

Who would you cast in the movie version of The Flying Circus?

What are you working on next?

I’m just now in the dithering and exploring stages of my next novel. I always start with creating my characters.  I have a great family dynamic all figured out. At this moment, I think they’ll embark upon their adventures in two different time frames, 1965 through 1975 and 1983-ish. But that could all change tomorrow.