You are here: Home / Books / Whistling Past the Graveyard 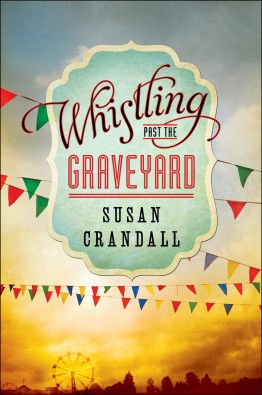 "Like Harper Lee's To Kill a Mockingbird and Kathryn Stockett's The Help, Whistling Past the Graveyard is destined to become a classic."

Whistling Past the Graveyard Audio Preview

“This novel gave me a wonderful “book hangover”… I didn’t want to read anything else for awhile because I was still basking in the wonderful story and characters. A great read. I can truly see it becoming a classic.”

“This is one of the best books that I have read in years (and I read a lot!)”

“I seldom write reviews but I had to share how much I loved this book……. I did not want it to end.”

My Grandmother said she prays for me every day. Which was funny, because I'd only ever heard Mamie pray, "Dear Lord, give me strength." That sure sounded like a prayer for herself...

No. No. I was nothin'. And I'd been bad. But I paid. Paid and paid before Wallace save me.

Our upstairs is hot as the hinges of Hades... I kinda hoped when Mamie got home late this afternoon, she'd find me passed out from heatstroke.

The colored don't choose to live here. It's where they're allowed to live.

I was horrible thirsty, but I didn't take it; Mamie had made it clear: no matter even if we're about to expire from thirstiness, we don't drink after negras.

Book Summary
The summer of 1963 begins like any other for nine-year-old Starla Claudelle. Born to teenage parents in Mississippi, Starla is being raised by a strict paternal grandmother, Mamie, whose worst fear is that Starla will turn out like her mother. Starla hasn’t seen her momma since she was three, but is convinced that her mother will keep her promise to take Starla and her daddy to Nashville, where her mother hopes to become a famous singer—and that one day her family will be whole and perfect.
When Starla is grounded on the Fourth of July, she sneaks out to see the parade. After getting caught, Starla’s fear that Mamie will make good on her threats and send her to reform school cause her to panic and run away from home. Once out in the country, Starla is offered a ride by a black woman, Eula, who is traveling with a white baby. She happily accepts a ride, with the ultimate goal of reaching her mother in Nashville.
As the two unlikely companions make their long and sometimes dangerous journey, Starla’s eyes are opened to the harsh realities of 1963 southern segregation. Through talks with Eula, reconnecting with her parents, and encountering a series of surprising misadventures, Starla learns to let go of long-held dreams and realizes family is forged from those who will sacrifice all for you, no matter if bound by blood or by the heart.
From the Desk of the Author
Starla Claudelle, the main character for Whistling Past the Graveyard, had been whispering in my ear for months before I finally allowed her to tell her story. I was working on another novel at the time, and I leave no novel unfinished—until now. Starla was so stubborn and intent on doing what she thought was right that I finally relented, closed the file of my half-finished novel (a bit of a relief actually, as it was giving me fits—humm, I wonder if that was Starla’s doing too?) and started working on Whistling Past the Graveyard.
So began an adventure for both novelist and character. As a novelist, I was embarking on a project unlike any I’d previously written. There was no guarantee any publisher would want to publish it. And yet, it was clear to me from the beginning, Starla was going to tell her story in her own way. It turned out that to be a very good thing that I stopped being my own stubborn self and let Starla have her way.
Inside Information

Puffed corn snacks (Mike-Sells Puff Corn Delites, Natural White Chedder Cheetos, etc.) Many, many bags. I even rated them on my blog.

Additional Praise for Whistling Past the Graveyard
"Fans of … coming-of-age tales set in the 1960s such as Saving CeeCee Honeycutt will enjoy the ride.” - Publishers Weekly
"This is a work of imagination in the mind of a 9-year-old child that might remind you of Harper Lee's To Kill a Mockingbird or Kathryn Stockett's The Help... It's a real winner!" - Liz Smith, The Chicago Tribune
"WHISTLING PAST THE GRAVEYARD is a multi-layered saga that can be enjoyed by teens and adults alike. It has a cinematic quality that will make readers wish for a screen version. And you can’t say better than that." - BookReporter.com
"Inspiring... told with honesty." - Coffee and Crackers
"It’s not easy to keep such a young narrator convincing for more than 300 pages… author Crandall manages it well. Readers will take to Starla and be caught up in her story.” - Booklist
"A luminous portrait of courage and the bonds of friendship, this coming of age story is as endearing and spirited as they come.” - Shape Magazine
"Crandall threads historical detail throughout the book as the struggles of the civil rights movement are vividly portrayed…Crandall’s young narrator captures the reader’s heart.” - Library Journal
"Worth the hype. Whistling will remind readers of favorite Southern novels, from The Secret Life of Bees to The Help.... [Crandall] is a deft stylist who handles Starla’s first-person dialect with ease." - Wilmington Star News
"Fall in love with spunky Starla Claudelle . . . This wonderful novel will be devoured by bookclubs and will cause every parent who finishes it to immediately find and hug their children.” -Jill Hendrix, Fiction Addiction
"A delightfully complex story about defying the odds to find the gifts we have tucked inside us." - Shelf Awareness
"Crandall delivers big with a coming-of-age story set in Mississippi in 1963 and narrated by a precocious 9-year-old…Young Starla is an endearing character whose spirited observations propel this nicely crafted story.” - Kirkus
"Readers will take to Starla and be caught up in her story." - Mary Ellen Quinn, Booklist
Publishing Information
Author: Susan Crandall
Publisher: Gallery Books
Category: Fiction, Historical Fiction
Release Date: 01/01/1970
Format: Hardcover, Paperback, eBook
Pages: 320ISBN: 978-1476707723
Copyright © 2013 Susan Crandall