You are here: Home / Book Reviews / Book Pick: The Weight of Silence by Heather Gudenkauf 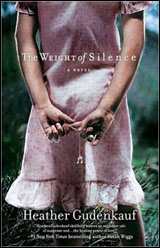 I was initially drawn to his book because of its cover. And I have to say, it did a great job of portraying the book. As some of you already know, authors have very little, if any, input into their covers. Kudos to the team at MIRA.

Secondly, I was interested in this book because it deals with child character points of view. I love writing from children’s and teen’s perspectives and was interested in how this author handled it. This story is about a seven-year-old Calli Clark whose father is absent most of the time and drinking when present. She’s experienced a trauma at age four and has been a selective mute ever since; as in she won’t talk, but there is no physical reason why she can’t. She has a special bond with her best friend, Petra, who lives next door and isn’t bothered by one-sided conversations. One morning both families awaken to find their daughters missing.

The book is told in several first-person accounts, Calli, her brother, her mother, Petra, Petra’s father and the sheriff’s deputy who not only is working the case but he and Calli’s mother have a past. It takes place all in a single day, filling in each character’s back story a little at a time. This delivery seemed to me to draw away from the urgency of the situation with the missing girls. However, it was very well done and parceled out in small doses.