You are here: Home / Book Reviews / Book Pick: The Light Between Oceans 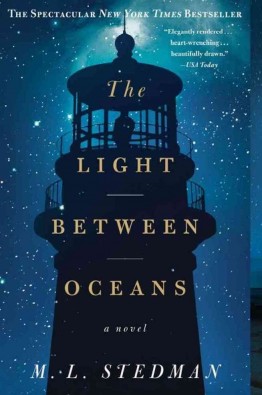 I’m always thrilled to find a good book that defies all current popular trends. When you hear the the setting of this book, you might shrug and wonder how such a novel could be interesting. The Light Between Oceans proves a well-crafted character drama can thrive in any environment, no matter how desolate or bereft of outside influence.

Following traumatic service in WWI from which he’s managed to emerge an uncompromised man, Tom Sherbourne takes a job as a lighthouse keeper on a deserted speck of Australia called Janus Rock. There are literally no other human beings on this island and a supply boat arrives only a few times a year. From this distance, he woos and wins a young wife from the mainland, Isabel. Their life of isolation begins happily. But years wear on with miscarriages and a stillbirth for Isabel, tragedies survived without the support of a mother or doctor or friend. Shortly after the stillbirth, a lifeboat washes ashore with a dead man and an infant. There is no communication available to contact authorities, other than missives sent on the supply boats. By then, Isabel has convinced Tom (no easy task, that) that they should claim the girl as their own. The cocoon of their isolation has let them forget there are other people in the world, with stories as tragic as their own. That all comes to an end when they return to the mainland with their child.

I adore great characters and this book delivers from the main characters of Tom and Isabel, to the rarely seen secondary folks. The Light Between Oceans is carefully crafted and beautifully written. The characters are flawed, as all good fictional folk should be. We ache for their suffering, and yet the author does not soften the reality of poorly made choices and human weakness.

This wasn’t a novel that drove me deep into the night; I was quite able to place my bookmark, close the book and turnout the light. And yet there is something so compelling in the characters that I looked forward to opening it back up again.