You are here: Home / Books / Promises to Keep 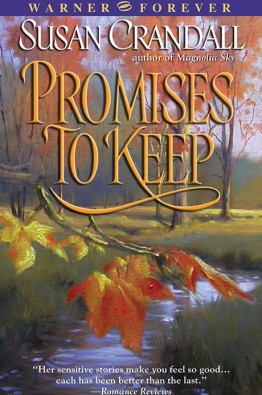 “Promises To Keep is a treasure. I found myself unable to stop reading once I started.”

Book Summary | Author Note | Related Posts | Publishing Information
Book Summary
Molly Boudreau has worked all of her life with a single minded focus: becoming a doctor. She’s overcome every obstacle in her path, of which there were many for the third child of a single father in small town Indiana. But as she stands on the threshold of her dreams, she realizes her quest has left her isolated, she yearns for a soul-stirring connection. And her prayers are answered in a way she never could have predicted. Sarah Morgan, a pregnant woman with a past cloaked in secrecy, shows up at Molly’s clinic. Molly suspects a woman in hiding. Two souls, both needing friendship, soon find it in one another. But Sarah is murdered only days after her baby’s birth, and after extracting a promise from Molly to protect the baby from its unnamed father – a man the mother swore was evil, a man Molly suspects killed her. Molly risks both her safety and career when she flees Boston and returns to her Indiana hometown. With everyone assuming the infant is hers, she has no trouble hiding the much more explosive truth until magazine reporter Dean Coletta arrives and begins asking probing questions. Molly tries to guard her heart, but Dean soon fires that emotional connection she’s been craving. But Dean has a secret of his own – one that threatens both Molly and the future of the child she loves more than life itself.
From the Desk of the Author
Inside Information

This book was my second to retain its original working title.

Additional Praise for Promises to Keep