You are here: Home / Excerpts / The Flying Circus Preview

At some point Henry must have fallen asleep, because Gil was kicking his shoe. “It’s time.”

As the walked toward the pasture, the sun inched over the horizon, silvering the mist that clung to the low spots and snaked in the ditch beside the road.

“How many people you think’ll show up today?” Henry asked.

“But you said they always–”

“There aren’t going to be any people because we’re flying out of here right now.”

“I can’t afford to waste a day hoping a couple of farmers show up. I need to harvest a town.”

Henry had already decided not to trust her. And the way he’d caught her looking at Gil when she thought no one was watching, as if he were the most interesting man she’d ever set eyes on, told him there could be trouble. What if she got Gil to hang around here another day that could lead to still another? A willful woman could change the course of history–the path of a man’s life was easy pickings. Henry had learned that firsthand. The sooner he and Gil and that airplane were were away from here, the better. Yet, sneaking off seemed the wrong way to go about it. “She did feed us.”

They were getting near the pasture. Traveling the distance had taken a tenth of the time it had taken last night, wrangling that motorcycle across country.

“But you said you’d give her a ride.

I did not. I offered her uncle a ride. He declined. And her aunt and uncle fed us.”

Henry couldn’t ignore his relief. “She’s gonna be mad as a wet hornet.”

No doubt–Oh, shit!” Gil broke into a run. “Hey!” he shouted as he leaped the wire fence. “Get away from there!”

Henry looked across the pasture. Tilda stood eating the wing of Gil’s plane. Henry took off on Gil’s heels.

“Shoo! Shoo!” Henry waved his arms over his head as he ran.

“Get!” Gil swatted the air.

She took a reluctant step away from the wing.

Gil growled and ran his hand over the fabric.

Henry took a step closer. The cow hadn’t been eating it exactly. More like licking it like a lollipop.

“Why would she do that,” Henry asked.

Gil poked at the wet spot with a finger. “Not too bad,” he muttered. “Some cows like to lick the dope on the fabric.”

“The stuff that stretched it tight.” He flicked a finger against the dry area of the wing. It sounded like a drum. Then he did the same to the wet spot. It sounded a little duller, but still sounded solid. “The vapors will knock you on your ass when you’re purring it on. Worse than a bad drunk. Maybe it gives ’em a cow buzz. I should have stayed with her last night.”

Gil untied the ropes that kept the Jenny anchored to the earth, and Henry pulled up the stakes.

“We’re really going without seeing her?”

“I’m not the one she–” Henry decided to quit while he was ahead. “Where do you want these stakes?”

Gil took them and stowed everything behind the rear cockpit. Then he climbed back to the ground with an oil can in his hands and stepped up on one of the wheels. Henry figured he was lubricating the rocker arms. Gil did the same on the other side of the engine. After that he walked around the plane, ran his hands over the propeller, checked tautness on some wires, looked at and moved the flappers on the tail and upper wings. Then he went back to the front and rotated the propeller a few times.

Henry braced for the roar of the engine before he realized Gil hadn’t turned on the magneto switch yet. Wouldn’t that give a lot of credence to his claim of being a good mechanic if Gil had noticed?

“If you’re coming with me, climb up into the front cockpit. Careful. Just step right there close to the fuselage or you’ll go right through the wing.”

Henry hopped to, figuring the fuselage must be what a pilot called the body of the plane. “Fasten that belt around your lap,” Gil called as he put his hand on the propeller.

At first Henry couldn’t find the belt; then he located the two halves on the floor on each side of his seat. His stomach got a little queasy as he fastened it. Never in his wildest dreams had he imagined he’d be sitting where he was right now.”

Gil gave the propeller a hard pull. The engine caught in a deafening roar. The wind from the blades sucked Henry’s breath away and tried to rip the hair from his scalp.

The plane inched forward. He located the magneto switch in his cockpit, in case he had to cut the engine before the plane ran over Gil.

But Gil was as fast as he claimed. By the time Henry spun around to look at him, he was already stepping into the rear cockpit. He sat down, pulled on his goggles, and gave Henry a salute.

That tiny gesture made him realize how much he missed being a part of something outside himself. It was almost as great a gift as his first flight.

Gil throttled the engine and swung the nose toward the expanse of the pasture. Before Henry could blink, they were bouncing along, gaining speed. The nose of the plane was so high Henry couldn’t see where they were going. Gil was even lower behind him.

“How can you see?” Henry shouted, but his words were torn away and tossed into the air.

The plane crabbed a little sideways, giving him a glimpse of what was in front of them, and then straightened out.

The vibration set Henry’s teeth to clattering against one another. His eyeballs shook. He slid lower in the seat and braced his arms and legs against the inside of the cockpit.

The noise! The wind! The jouncing!

Suddenly the bumping stopped. The noise of the wheels on the ground silenced. The vibrations changed and Henry’s stomach slid to the tail of the airplane. For a moment, he was so dizzy, he thought he was getting ready to have a fit of some sort.

He inched his eyes up over the leather-wrapped edge of the cockpit, careful not to lean too far to the side, just in case he might throw the plane off-balance.

Oh my God in heaven! The ground falling away. Trees had shrunk to the size of bushes/ Cows were team oxen from toy soldiers.

He was flying. Flying! 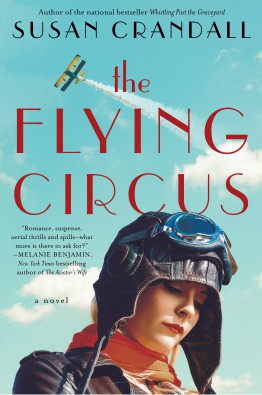