You are here: Home / Blog / From the Writers Cave

I’m becoming one of those writers. You know, the reclusive, glued to the keyboard, forgets to brush hair, can’t hold a conversation with real people kind of author. I’m becoming disengaged. I mean, just look at what I had on my feet for two hours before I noticed. 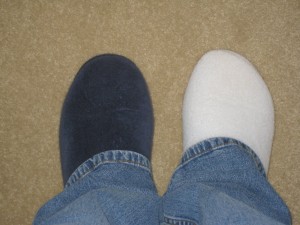 Both of These Things Are Not Like the Other

Seriously. I was even up and walking around.

Guess that’s what I get for having two pair of slippers under my desk.

I would blame it on the snowy weather, but I think it’s more than that. I like being snowed in. I like it when my phone doesn’t work.

So I’m countering my anti-social gravitation by taking some classes with my mom and my daughter, separately — that way I have to go out twice, not just once.

My mom and I are taking a very, very, very beginners Yoga class … you know, so we can prevent what my brother fondly calls “pre-rigor mortis.” He’s not very flexible, but then again, he never was, so I can’t tell if he’s losing ground or not. I used to be very bendy. Not so much now that I’m (ahem) older and spending most of my time in front of this computer screen. So the class. Mom and I spend more time wiping tears away from laughter than yoga-ing, but I have faith we’ll get the hang of it.

Now my daughter and I are taking a cake decorating class. She’s pretty good at it. I, on the other hand, have to say the only thing good about my cakes is that we get to eat them. Last week was our first week to tote in a cake to class. I made the mistake of baking devil’s food and frosting it with white frosting. Let’s just say I didn’t shame myself by taking a photo, but believe me, that white frosting looked like cookies and cream.

Still, it was more level than any cake I’ve ever baked, so there’s a mark for me.

My all time worst cake was one I made it for my daughter-in-law’s birthday. I knew I should have stuck with a sheet cake, but no, I had to make a layer cake. It was uneven and broke into three sections after it was frosted. She was very nice and blew out the candles as if it was a normal cake. We dubbed it “the birthday blob.” As you can see, we couldn’t even chance piercing it with more candles.

I’ll post a photo of my class cake tommrrow … if it looks better than the birthday blob.