You are here: Home / Archives for Dogs

Hurdles and Barricades. Blockages and barriers. They’re not all connected to my writing life.

I once thought that when my two children were grown and out of the house, I would no longer be crippling myself by stepping on stray Legos, tripping over Barbie Dream houses and near-missing the occasional hamster someone forgot to put back in its cage. My basement would no longer house rock band equipment–and a rock band. As some of you know, when children leave for college their stuff stays put and you long for the day they have their own place—which turns out to be an apartment too small to house the accumulated wealth of their childhood.

Finally the children were both married with actual houses of their own. Bit by bit, boxes of comic books, baseball cards, beloved dollhouses, and vacation and school mementos moved back with their owners. (It was quite amazing how many things that were too precious to part with when stored at my house were useless and needed discarding when it was time to move on.)

The ping pong table was once again unfolded in the basement. I commandeered more closet space than any one woman should be allowed to have–but that’s a subject for another blog.

Then came the grands—all at once. We only have four. But because the eldest was barely two when the twins and their cousin came along within eight weeks, most of the time it feels like there are more. Up went the baby gates. Out came the cabinet locks. New collections of toys accumulated and had to be kept at the ready, the tiny table and chairs came out. My house was once again a labyrinth of obstacles.

Ahhh, at last. They were all steady on their feet. They knew not to eat scouring powder. They could open closets to retrieve toys and put them back before they go home. My house was once again blessedly barrier free.

But fate said, “Not so fast.” My beloved dogs are now geriatrics. The elder, whom we’ll call Houdini, can no longer hear or climb the stairs to 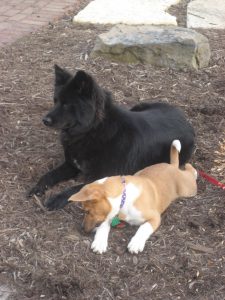 his special, private territory on the second floor. And the other dog, whom we’ll call Hateful Harriet, has become super nasty toward her gimpy and deaf housemate. Sooooo, after taking Hateful Harriet (her name changed to protect the guilty,, although to be fair, she’s by far the smartest, most obedient–unless Houdini is bothering her–dog we’ve ever had) to special dog behavioral counseling, etc. with no results and after breaking up one too many dog fights, the gates came back up. Peace at last? “Not so fast.”

Hateful Harriet doesn’t like it when her housemate hangs around the gate. (Again, to be fair, he’s a knocker, tap-tap-tapping his nails on the metal until we’re all batty). She’s perfectly capable of jumping over said gate (at age 11) but, fortunately for her, has not. She does try to teach him a lesson, by charging, snarling and acting downright inhospitable. Of course, he can’t hear and basically just stands there and antagonizes her further.

So now we need to establish a no man’s (or no dog’s) land (the dining room). And until my next order of gates arrives (naturally one of the openings is 96 inches wide), makeshift barriers must suffice. This, my friends, is worse than any of the above stages.

And of course, both dogs want to be with me at all times. So, to be as fair as possible, I currently I divide my writing time between the kitchen counter and the living room sofa. Someone’s always miffed.

In order to go from my kitchen to virtually anywhere in the house is a feat for an acrobat—gates, furniture, barriers and barricades (which, amazingly, our gimpy guy, by acts of willpower and magic, finds a way around–thus Houdini).

Probably any sane adult would see the futility and surrender at least one of these dogs. But they are part of our family, so we adjust.

I’m pretty sure when the sad days come for Hateful Harriet and Houdini cross the rainbow bridge, either me or my husband will be nursing a broken bone from falling over a gate or a barricade—and we’ll have to accommodate an entirely new scenario of inconvenience. 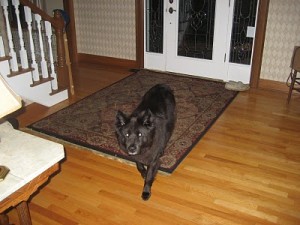 I like to think of myself as open-minded and I’ll try almost anything once. However, this scenario never once crossed my mind before it presented itself.

I was visiting a wonderful book club a couple of weeks ago and met a woman who is an “animal communicator.” Now I’ve heard of these people, who, like Dr. Dolittle really can talk to the animals. My cousin — she who cannot say no to a stray of any kind — has been surprised by the accuracy of an animal communicator she knows. Anyway, this lovely woman at the book club offered to have a little chat with my dog, Bear, and let my readers know what it’s like to be the sidekick of an author.

So here’s what my Bear had to say to me through Shannon Gross (www.shannongross.com), the animal communicator: 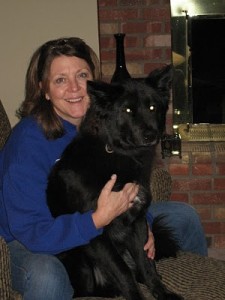 Well, working with me or not, Bear does bring calm to my life, that much I can say is a fact.

For the next two weeks, Bear is open for questions via Shannon. Please post any questions you have for Bear on Facebook and my animal communicator friend will see if he’ll share his answers with us. Like I said, I’ll try anything once if it can be done without harm or peril!