You are here: Home / Blog / The Wasp and The Slipper

All right, I know I’m tardy on posting this little tid-bit, but that’ll make it that much sweeter when you read it. As I said in my last blog, I spent 4 days in the Tennessee mountains with fellow writers Karen White and Wendy Wax. We spent lots of time writing on the balcony of our fabulous cabin, drinking in this view.

While sitting in a lovely rocker, writing away on her next fabulous women’s fiction novel, Karen had an ugly encounter with a Tennessee wasp — which according to Karen is only outsized by the bugs she battled while living in South America as a child. Said Tennessee wasp somehow entered Karen’s slipper (which is required writing attire for her). The result was startling for both Karen and the wasp. In her rapid reaction, Karen’s slipper flew off her foot, through the slats in the balcony railing and landed some thirty feet below (that’s it in the photo below, the forlorn white sole looking up at us longingly). This picture was taken with a zoom lens and it much farther away than it looks. 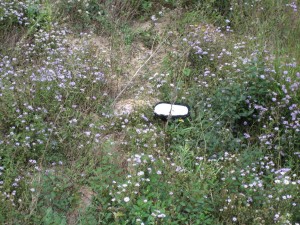 Now you have to understand the relationship between Karen and her fuzzy slippers — as I said, they’re integral to the writing process. She goes nowhere without them. She quickly donned her tennis shoes and headed out to retrieve her slipper — only to discover it was a much steeper descent to where said slipper lay helpless against bears with cold feet and hawks that needed nesting materials. Also, the plantlife was in cahoots with the forest creatures, protecting what now rightfully belonged to the wilderness with stickers and nettles. She was defeated.

I believe Karen left the slipper’s mate in the cabin, just in case some intrepid soul brought mountain climbing gear and could retrieve the poor abandonded footwear.

This is why I always write barefooted.