You are here: Home / Blog / The Yard Ate that Ate the Writer’s Glasses 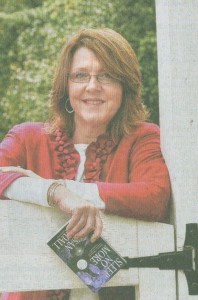 Instead of staying inside and sitting at my computer like every good writer should, I couldn’t resist a bright sunny, albeit brisk, Indiana day. There was so much to do. Leaves to rake. Frostbitten hostas to pull. Bulbs to plant. Decorative grasses to cut. I enlisted my son’s help for a while. It’s so much easier to cut those five-foot tall grasses with the hedge trimmers if someone has their arms wrapped around the wayward fronds.

Usually when I’m wielding the electric hedge trimmers for this activity I cut through the 100 foot extension cord. It’s now more like 75 feet long and has had about five new plug ends put on. But not today. I was so proud. The grasses were down… and the cord intact. (Never mind the fact that Reid was actually doing the cutting this time. I still take full credit.) I was feeling good. I handled the hostas. I took care of the leaves and did a final cut on the lawn. What a sense of accomplishment!

At some point during the day, I had ventured inside to check my email. When I went back outside, I’d forgotten to take my glasses off. I hate, hate, hate wearing them outdoors. I can see fine, as long as I’m looking at least two feet away. I nearly turned around and went back inside to leave the glasses. But I’d gotten warm, bundled as I was in a sweatshirt and a fleece jacket, so I took off my jacket and laid it on the deck and set my glasses on top of my jacket. (I know what you’re thinking, and you’re so not right.) They were just fine. My daughter stopped by with her wild dog – and the glasses were still fine. She left. It was getting chilly. I put the jacket back on – and slipped my glasses in the front pouch pocket of my sweatshirt. (cue dramatic music here)

As I did this, I thought, “not a good idea.” But I was just going to be picking up my rake, trimmers and less than 100 foot extension cord, so no big deal. I picked up the trimmers … and spied the infamous “one more thing.” That groundcover was getting to raggy and too tall. I’ll just trim it while I have everything out.

And I did. One snip led to another and an hour later, I’d really done some good. Except, my glasses were no long in my sweatshirt pocket.

By now it was growing dark. Did I mention this bed is on a ravine bank and leads to woods? Yeah.

I began my frantic search through the woody groundcover, now trimmed to only 10 inches tall. No luck. I call my neighbor to see if her hubby has a metal detector – a long shot I’ll admit. He didn’t. She did come over with a “deer light” – guaranteed to blind a deer and anyone else who looks at it directly (sorta like an eclipse). We searched with the light. No luck. I finally had to take my numb fingers inside for the night.

As I fell asleep, I kept thinking of how there was probably a farsighted squirrel out there reading the paper right now. 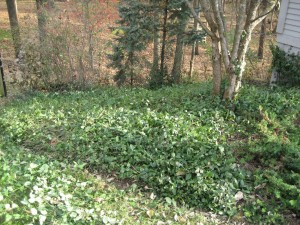 Do you feel my pain?

Next day, 8 am, I’m on my hands and knees going over this ground cover inch by inch, cutting it back until I could see the dirt. And truth be told, I spent the entire day doing this, with the exception of an hour-and-a-half when I went to meet my critique group (and they were all laughing as I came into the meeting, they’d read about my dilemma on facebook). Sun was setting again. No glasses. Unfortunately these are those expensive progressive lenses with all the goodies like anti-reflective coating – they cost too darned much to just let some squirrel have them.

Today I get to go out and go through the leaf piles handful by handful.