You are here: Home / Blog / The Nittie Club–or Every Writer Needs a Friend with a Whip and a Muse with a Gun

No, it’s not naughty…although our motto is “Show me your nitties.”  It has nothing to do with a hobby, or craft.  It’s not like Costco—although it is exclusive and has limited membership.  No photo ID required.

It began on a dark and stormy night…oh, no, not that.  But it did begin years and years ago, when three unknown and unpublished writers were honing their craft in isolation.  And then [hallelujah chorus here] they found one another on the Internet…back in the day when only the oddly-fascinated-with-technology had Internet friends.  Actually, only two of us, Karen White and I, met in an Internet writers’ group.  Karen and Wendy Wax met through a writer’s organization in the real world, so I guess you could say Wendy and Karen’s origins were more normal for the times—oh those long years ago.

Karen and I critiqued via the Internet for a year before we actually met in person and dispelled our families worries that we were each talking to some strange dude in his mother’s basement and not a bonafide lady writer.  Actually, I figured that if it was some odd dude in his mother’s basement, he was a heck of a writer and I was sticking with him as a critique partner.

Karen was the bridge that brought the three of us together. 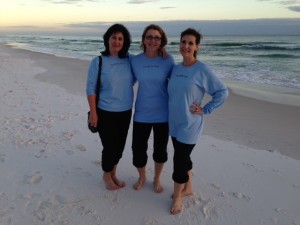 We go on retreat.  We brainstorm.  We share insight.  We vent.  We offer suggestions.  We talk one another off the literary ledge.

It was a kinder and gentler process in the beginning, centered entirely around the compliment sandwich.  “I really liked ABC, but I felt you could have expanded on DEF, gone deeper in GHI, and I loved what you did with JKL.”  It really took a lot of typing.  As time progressed, and the published books accumulated, this was streamlined.  “Where’s the motivation?”  “I just can’t see this character doing this—like ever.”  “Shouldn’t we see this in action?”  “Not so fast, Norma! Did you really think I wouldn’t notice you glossed over this?”  Yes, we still compliment the gems…but with an emoticon smilie face.  No need to waste words.

And then there are the nitties.  Not major character issues.  Not plot problems.  Not the big things that need to be discussed in an email and worked out.  But all of those little things we note in “track changes.”  The tiny things that must be addressed: typos, grammar, incoherent sentences, wrong character name—yeah, it happens.  The phrase “nitties on the pages” usually concludes every email.

And so, The Nittie Club.

Although I feel we’ve enhanced one another’s work, the most valuable thing we share is a great bond of friendship.  No nitties on those pages.

Yeah, we’re all that and more.