I’m just about ready to surrender and not even try to write until after Christmas. Although I have all of these thoughts swirling around in my head about my current work in progress, it seems I can only grab a handful of minutes at a time. But it isn’t as if I’m not working…

I started off my day with an Internet radio interview conducted by the gracious Cheryl, Dallas Book Diva. This woman really knows how to conduct an interview. It’s difficult for me not to sound like a babbling idoit once I start chattering about one of my books. But she was so organized and did such a great job of asking just the right questions — which tells me something very, very important about her. She read the book, really read it, not skimming and getting facts confused. She knew my characters probably as well as I do, and had some keen insights of her own.

Cheryl loved SLEEP NO MORE, she loved the plot, the characters, the family drama and the romance. I’m very flattered, because she gets dozens and dozens of books for review and only reviews and interviews eight per month. So here’s a huge thank you to Cheryl!

After my interview, I had to take a break to wet the parched whistle. Then I worked for a while on a very personal Christmas gift I’m preparing for my mother. Then it was time for lunch, followed by a trip to the post office to mail off books to contest winners — this is worth repeating … I went to the post office in December. The line is killer in a non-holiday month.

After I brought my trembling hands and gritted teeth out of the post office, it was time to take my daughter to the airport. She’s going to visit a lifetime friend who now lives on the west coast. They were born three weeks apart, grew up two doors from one another, went all through school (including college) together. They’re going to have such a great time!

After I dropped her at the airport curb, getting the stink-eye from the security agent who seemed to think we were taking too long to get the luggage out of the car, I hit rush hour traffic — on a Friday. Grrrrrr.

On the way back home, I had to stop at my daughter’s house and pick up our grandpup, Ellie, and all of her gear ’cause while her mommy is having fun on the west coast, she’s staying with us. We have a dog too, a big dog, but our dog is just short of being a stuffed animal, you hardly know he’s around, doesn’t eat much, doesn’t bark much, has his own bedroom and stays there a lot of the time. Ellie … well, Ellie is the exact opposite, a bundle of muscle that wants to play (intensely) constantly. Lucky for her she’s so cute. That’s why she gets to stay with us and not at the kennel — those brown puppy eyes and cute floppy ears. Right now she’s supervising the writing of this blog. This is her in her Colts jersey. She’s a fan. 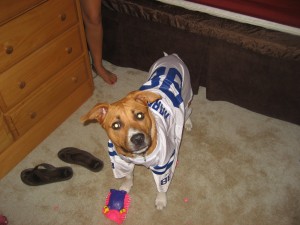 Once I had Ellie all settled in, it was time for the ritual Friday night at the movies. I can get my husband to go see just about any movie if I buy him popcorn. We saw Invictus. It was good. Morgan Freeman was phenominal, as always. Post movie, it was time to run a little energy out of Ellie (she’s poking me right now with her nose, trying to get me to throw her stuffed squirrel). Wonder if she’ll ever go to sleep tonight? Heaven knows, I’m ready to go to bed.