This past weekend I spent almost every waking hour working in my yard. We’ve been having an unseasonably warm stretch for April here in Indiana, something I’m certain we’ll pay for in May — probably with snow. Watch it, those of you who were lulled into purchasing flowers!

Anyway, I pruned, fertilized, and edged about a million feet of mulch beds (okay, maybe it was only half a million, but seriously, it takes 16 yards of mulch to cover them). Now it’s time to guilt the grown children into helping me move and spread the dump truck load of mulch that will be arriving in my driveway today.

While I was working, I looked up and there were six hawks circling overhead. 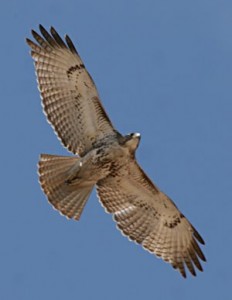 They made me think of my dad. He’s been gone for nearly 21 years, but some days it seems like only yesterday he was buzzing my house in his plane and scaring my neighbors half to death. I’ve always thought that if there was anything to receiving your rewards in Heaven, he’d be up there flying like a hawk. He loved the wind in his face, loved flying open cockpit planes and his Piper Cub with the door open — really low. I truly think he would have been happy as a bird.

He was not only a private pilot (recreational), but he spent endless hours building his own aircraft in our tiny garage. It began by building and flying model planes, but eventually grew into the real thing. Like everything he did, it became a near obsession. I remember hearing him out there at all hours of the night working away (my sleeplessness must be genetic). Here are my children “helping” him. 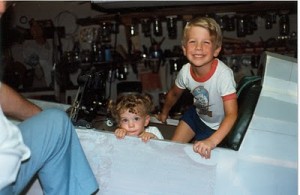 Reid and Allison in Dad's Plane

Unfortunately, he didn’t get to finish this plane.

Now back to that obsession thing. He was also infatuated with books and reading — funny thing for a guy who hated school and joined the Navy long before high school graduation. Unfortunately for me, he died before I even began writing. I often wish he was around to discuss the emotional and psychological aspects of my characters; he was the kind of guy who could see deep inside people.

Being outdoors always helps me think, I figure out lots of plot and character stuff while cutting the grass. But this weekend, working in the yard and seeing those hawks, made me feel close to my dad. And I like to think maybe he helped me just a bit with the story questions I was wrestling while I was out there working.